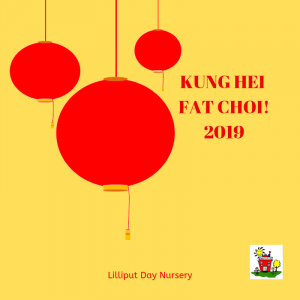 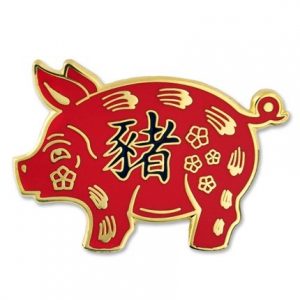 The years allocated to each animal are in a very specific order. According to an ancient Chinese folk story, the Jade Emperor had called 13 animals to a meeting and announced that the years on the calendar would be named according to the order they arrived in. This led to ‘The Great Race’.
The rat travelled on the back of the ox, leaping from its back to nab first place. The pig stopped for a snack and a nap and arrived last; a cat was also in the race but drowned during the competition, leading to there being only 12 animals in the zodiac.
Pig (from 5th February 2019 onwards)
Pigs are loyal friends but only when you get to know them, so their social circle is often small. Like the monkey, they like to play pranks on people and do not know when to stop. Pigs are also known to be lazy and clumsy.
Lucky Signs for the Pig
Lucky numbers for people born in the Year of the Pig are two, five and eight and their lucky colours are yellow, grey, brown and gold. Their lucky flowers are daisies and hydrangeas and their lucky directions are east and southwest.
The personality of the Pig
People born in the Year of the Pig are characterised as motivated, honest and enthusiastic. They concentrate on their goals and devote their energy to achieve them. They are generous and helpful towards others and strive for positions of power and status. While those born in the Year of the Pig do not waste their money, they are not afraid to treat themselves every so often and as a result may be deemed materialistic.
Strengths: Diligent, compassionate, generous and calm
Weaknesses: Gullible, over-friendly and quiet
Why do the Chinese value Pigs?
Pigs symbolise luck, wealth, honesty and prosperity to the Chinese. Their chubby faces and large ears represent good fortune and the zodiac creature is always well-fed and looked after by others. They are thought to be lucky from birth and as a result Chinese families believe their sons born in the Year of the Pig are fortunate.
As pigs tend to have large litters, the Chinese say they are a sign of virility and couples trying for babies often display the symbol in their bedrooms in hope of conceiving.
A person born in the Year of the Pig is thought to be blessed with wealth and is considered to be a hard-working, sociable and reliable individual, with a good sense of humour. Men tend to be optimistic, gentle and quiet while women are excitable, organised and caring.
What does your Chinese zodiac sign mean?
In Chinese astrology, the 12 animal zodiac signs each have unique characteristics.
Rat: Intelligence, adaptability, quick-wit, charm, artistry, gregariousness.
Ox: Loyalty, reliability, thoroughness, strength, reasonability, steadiness, determination.
Tiger: Enthusiasm, courage, ambition, leadership, confidence, charisma.
Rabbit: Trustworthiness, empathy, modesty, diplomacy, sincerity, sociability.
Dragon: Luckiness, flexibility, eccentricity, imagination, artistry, spirituality, charisma.
Snake: Philosophical, organised, intelligent, intuitive, elegant, attentive, decisive.
Horse: Adaptable, loyal, courageous, ambitious, intelligent, adventurous, strong.
Sheep: Tasteful, crafty, warm, elegant, charming, intuitive, sensitive, calm.
Monkey: Quick-witted, charming, lucky, adaptable, bright, versatile, lively, smart.
Rooster: Honest, energetic, intelligent, flamboyant, flexible, diverse, confident.
Dog: Loyal, sociable, courageous, diligent, steady, lively, adaptable, smart.
Pig: Honorable, philanthropic, determined, optimistic, sincere, sociable.
Chinese New Year traditions
In preparation for the new year, the Chinese will clean their homes and put up red decorations and lanterns. 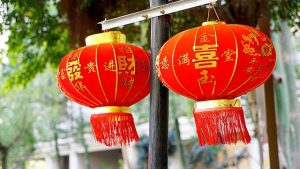 The celebrations will then officially kick off with a New Year’s Eve family dinner, with fish and dumplings being served to encourage prosperity.
Shou Sui, which translates as “after the New Year’s Eve dinner”, follows the traditional feast, where families stay awake throughout the night and gather for fireworks at midnight to banish evil.
Adults typically give children red packets containing money at Chinese New Year, to help them avoid the evil and wish them good health.

Request a free parent pack, request a viewing, enquire about funded places, and get your free copy of Choosing a Nursery for your child. Get in touch