Another big Eid celebration is on the way. 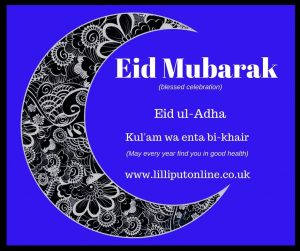 This second Eid will be one of the holiest days of the year for Muslims in Birmingham, across the UK and around the world.
Eid ul Adha is actually the more holy of the two events.

So when is the next Eid and what is it all about?

When is Eid ul Adha 2018?
Whereas Eid ul Fitr comes at the start of the month of Shawwal (after the end of Ramadan), Eid ul Adha is towards the middle of a month.

It starts on the 10th day of Dhul Hijjah, the 12th and final month in the Islamic calendar. The name means month of the pilgrimage.

Eid ul Adha lasts until the 13th day of the month.The date of Eid ul Adha is not known until the start of Dhul Hijjah has been determined by a sighting of the moon – and that month is confirmed to have begun on Sunday, August 12.
The Islamic calendar is based on the lunar cycle so official sightings of the crescent moon determine the end of one month and the start of the next.
Because of this, dates are not in sync with the sun-based Western calendar but drift back by 11 days a year.
According to the Umm al-Qura Calendar of Saudi Arabia, Eid ul Adha will be on Tuesday, August 21, 2018.

Birmingham’s Eid ul Adha celebrations have now been announced as being on that date.

Hajj 2018 is expected to begin on Sunday, August 19, 2018 and continue till Friday, August 24, 2018. But trips to Mecca for the Hajj are usually for two to three weeks.
Worshippers carry out a series of rituals at Mecca including gathering for prayers for a day on the plain of Arafah, near Mount Arafat.
They pray to be forgiven for all their sins committed over the preceding year and the coming year.
Those not carrying out the pilgrimage are expected to fast instead in order to earn the same forgiveness.

This is said to be the most important day of the Hajj.

What is Eid ul Adha?
Eid ul Adha means Festival/Feast of the Sacrifice.

It marks the date when Ibrahim was commanded by Allah to sacrifice his son, Ishmael, to show his devotion.
Ibrahim was about to go ahead with the sacrifice when he was given a lamb to slaughter instead.
It’s similar to the Christian and Jewish accounts in which God asked Abraham to sacrifice his son Isaac.
The story illustrates devotion to Allah and willingness to accept the command of the Almighty.

How is it celebrated?
Muslim men, women and children are expected to dress in their best clothes and perform Eid prayers outdoors in a large congregation – or, if it’s raining, in their local mosque.
The day begins with a prayer service in which Muslims recite from the Qur’an, followed by a brief sermon.
Muslims then embrace and exchange greetings (such as ‘Eid Mubarak’), give gifts to children, and visit friends and relatives.

Those in Birmingham traditionally celebrate Eid al-Adha with prayers in Small Heath Park.
There’s also a funfair at the park throughout the celebrations.

What else happens?
Muslims typically perform a full body-washing ritual – called ghusl – before going to the prayers.
As part of this festival, Muslims traditionally sacrifice domestic animals – usually a sheep, goat or cow – to represent the sacrifice in the original story, if they can afford to do so. British law insists the animal must be killed in a slaughterhouse.
A third of the meat is kept by the family, another third is given to relatives, friends and neighbours, and the final third to the poor and needy.
Large family gatherings are often organised, where the sacrificial meat is served.
Muslims often go shopping for new Eid clothes a few days before the celebrations, so Islamic retailers hold their biggest sales at this time.

When are the Eid public holidays?
Eid is a holiday in Muslim majority countries.
Those in the United Arab Emirates and Qatar are looking forward to a long break.
In Qatar, it’s expected that public sector workers will get holiday from August 19 to 27, while the private sector are set to be off from August 21 to 24.

In the United Arab Emirates, four days of national holiday from August 20 to 23 is expected.
Dates of these holidays will be confirmed nearer the time.

When is Eid ul Adha 2019?
Although dates are determined by an official sighting of the new moon, the lunar calendar gives clues as to when that is expected.
So we can predict that Eid ul Adha in 2019 will be on Monday, August 12, but note that in the Muslim calendar, a day begins at sunset on the previous day (Sunday, August 11).
In addition, several days after the listed date are also part of the Eid holidays.
There are usually four days of holiday for Eid ul Adha – which would then end on the evening of Thursday, August 15 – but it can range from three to as many as 16 days in different countries.
The Umm al-Qura Calendar of Saudi Arabia says Eid ul Adha is on Sunday, August 11, with many Muslim organisations sticking to the lunar predictions rather than waiting for a sighting of the moon nearer the time.

Request a free parent pack, request a viewing, enquire about funded places, and get your free copy of Choosing a Nursery for your child. Get in touch